The pee-wee CC and bantam AA dodge the Dodge Cup 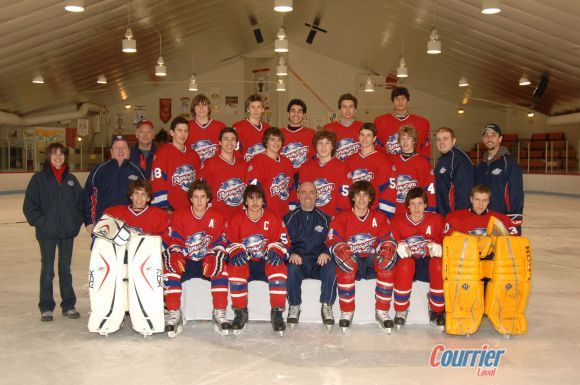 Les Grands Ducs de Delta staged a dramatic finish in the pee-wee CC category. Michel Groleau’s team experience a heating breaking finish of 4 to 3 in overtime against Gaspésie-Les Îles, in a great final. The Laval-native team had to be left satisfied with the silver medal. « Our speed enabled us to get to the finals. I am proud of my guys. It’s as if we won, » said coach Michel Groleau. To reach the final, Les Grands Ducs were victorious against the Panthers of the Côte Nord 3 to 1. Maxime Landry and Xavier Leblanc scored in the third period allowing Les Grand Ducs to get to the semi-final. The Laval residents had a difficult start to the tournament with defeats again the – Panthers of the Côte Nord 8-4 and against ‘ Express de Saint-Félicien 4-1. Moving forward, there was no room for error. Their but game was a 6 to 1 against the Orioles de Jonquière.

Les Patriotes of Laval headed by coach Dominic Ravenda failed in their attempt to gain the Dodge Cup by losing the final game 4 to 1 against the Éclaireurs de Richelieu, in the final match for the bantam AA category.

With a hat trick Alexandre Lemieux set the tone of the game by scoring a fast goal at 36 seconds into the first period. The only goal scored by the silver medal winners was that of Michael Cucinotta in the second period. « They scored a fast goal. We played catch-up, » said Dominic Ravenda. « We achieved our goal – to be part of the two last teams to play, » he added. Ravenda’s team experienced setbacks by losing 4 to 3 against the Castors from Sherbrooke and 4 to 1 against the Gouverneurs de la Rive-Nord at the beginning of the tournament. Up against a well, the Patriotes rebounded in the semi-final with victories of 5 to 1 against the Espoirs du Lac Saint-Jean, 4 to 3 against the Casotrs of Sherbrooke and 5 to 0 against the Cobras of Verdun-LaSalle. The Patriotes snapped up the honors in regional Championships facing the Sénateurs de Laval, in the Granby Tournament and in the eliminatory series. « The guys exceeded themselves. We played six finals during the last season. We won three of them, » he said proudly. The season of the Patriots is not finished yet. They will represent Laval along with the Sénateurs during a tournament in Quebec from May 1st to 4th in collaboration with the festivities surrounding the Hockey World Championships and the 400th anniversary of Quebec city.